Today sees the first trailer for The Dark Tower film,  directed by Nikolai Arcel with a screenplay by Akiva Goldsman, starring Idris Alba as Roland Deschain, the last remaining gunslinger, Matthew McConaughey as the Man in Black, and Tom Taylor as Jake Chambers. The film has been in development for a number of years with names like J.J. Abrams, Damon Lindelof, Ron Howard, and Javier Bardem all attached and having to drop the project at some point.

With movie adaptations come changes, and as Stephen King has said this is a direct sequel to his magnum opus so will change come to pass in this series of films. This reminds me of the series of posts I wrote airing out all the frustrations, with love, that I have with the book series. With the movie releasing in December perhaps it is time to reread the series and decide if the changes I thought of in 2015 were appropriate. 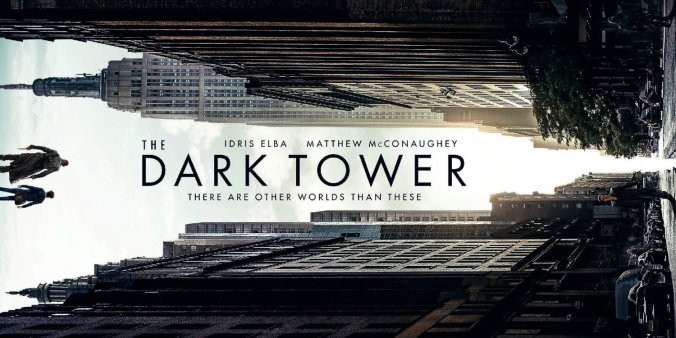 When those doors open to the Dark Tower at the end of Stephen King’s final volume the journey for Roland and his Ka-Tet will come to an end. The journey, however, is not without its hiccups and so here are some suggested changes for the “The Dark Tower VII: The Dark Tower.”

END_OF_DOCUMENT_TOKEN_TO_BE_REPLACED

The main issue with the sixth book in Stephen King’s The Dark Tower series titled The Song of Susannah is it is merely a bridge book between book five and the final one. It does not resolve the cliffhanger left at the end of The Wolves of the Calla but merely extends it into the final book, The Dark Tower.

END_OF_DOCUMENT_TOKEN_TO_BE_REPLACED

Finally through the boring fire that is book three of The Dark Tower by Stephen King we leave Wizard and Glass behind to return to the main story of the series with the Wolves of the Calla and The Song of Susannah. Though not the best in the series the Wolves of the Calla is definitely the best of the later books in the series while The Song of Susannah leaves you wondering whether it is wholly necessary or wishing there was more.

END_OF_DOCUMENT_TOKEN_TO_BE_REPLACED

In my original post I said that Father Callahan should join Roland’s second ka-tet in The Waste Lands at River Crossing. Now that I’ve reread Wolves of the Calla I see I’ve made myself some problems by moving where he is introduced, so let’s fix them now.

After hearing how Father Callahan got to Mid-World / End-World again in Wolves this story could fill the space that was originally the drawing of Jake into Roland’s world that I moved to book three. This will further strengthen the importance of the Rose in the vacant lot and be the part that reveals Marten / Randall’s background influence. (note: in my last post I eliminated the Walter / Marten / Randall confusion of all the names. There’s only Marten Broadcloak = Randall Flagg.)

Instead of Marten pushing him through a door in the Way Station to Calla he can do it the other way around. Black thirteen says on the Calla side, discovered by the Manni and it is they who beg for Roland and his Ka-tet to take it. Then with Randall’s remarks about having to “get ahead of them again” referring to Roland and Jake in The Gunslinger he goes through a door, Callahan follows and ends up in River Crossing.

Now you have two people talking about the vacant lot, the Rose, that area of New York, and now we get the introduction of the Low Men way ahead of time so there introduction later doesn’t come out of nowhere.

The fourth novel gets a blog post all on it’s own because it’s the one that needs the most change.

What should of been the most important Dark Tower book besides the last one turned out to be the worst, not only because Roland’s story of his first love drags but reveals so little of his past that is relevant to his quest for The Dark Tower until the very end. If it were me, I’d change this whole novel as it does not answer any important questions.

3.) What happened to Steven Deschain?

4.) Again, why does Roland want to go to the Dark Tower at all?

5.) Why should I care about John Farson’s scheme here if we never meet him and never see him destroy the Affiliation?

Don’t say these questions are answered in the comic book because of a.) whether they are canon are not is in question b.) that is the biggest cop-out I’ve ever heard. If it’s part of the story it should be in the series of novels and not in some side story in the comics written by someone else.

The introduction of Merlyn’s Grapefruit, the tragedy of Susan’s death, and Roland having to choose between saving her and The Dark Tower after he sees it in the Grapefruit is not enough to justify this long winded, desperate in need of an editor, side story. All the things this novel does with developing Roland and his first ka-tet could have been done on their quest for the Dark Tower. This isn’t even his full ka-tet, there are at least two others that he mentions but we never learn anything about until The Wind in the Keyhole.

In fact, most of the parts giving Susan’s point of view can be cut. Are we supposed to assume Roland learned all these parts of the story from the Grapefruit at the end? It’s not needed. The whole will they / won’t they part of the story drags on for too long.

The worst part of the novel is the antagonists of this novel, The Rhea of the Coos, the Big Coffin Hunters, and Susan’s aunt, Cordelia Delgado are most compelling and interest villains than any we’ve gotten so far or will get afterward. All in a story that barely matters to Roland’s quest. Why couldn’t Randall Flagg be more fleshed out for this story? Why can’t Modred, or the Crimson King? In fact, why can’t Randall Flagg and the Crimson King be in it? That would at least play into the lore of the series. King tried way too hard to make this a stand-alone novel, and I had the privilege of reading all these novels at once in 2007-2008. I can’t even imagine what it was like reading this book when it came out after waiting for years to get it.

Then Roland finishes his story and we get back to present day. This was easily the best part of the novel but what was the point of bringing back the Tick-tock Man from book three if he was barely a threat? Is King even trying to write a western mixed with fantasy? A Mexican stand-off would have been better but all we get is Eddie and Susannah gunning him down without effort in a parody of the Wizard of Oz.

Then we finally get the reveal after Roland and his ka-tet have been in the aftermath of King’s The Stand a confrontation with Marten Broadcloak himself and the reveal that he is, in fact, Randall Flagg. This confrontation is great if you don’t know what happens in the rest of the books because there is a promise of a future confrontation that never happens.

You can navigate to the other parts from here:

When I first read Stephen King’s opus, The Dark Tower, I was much younger and eating through books like gravy and mozzarella covered curly fries while drunk in a diner. I was not yet a writer so my opinions on storytelling was much different.

As I am going through them again I am noticing their flaws. I still cherish this story but some of King’s decisions are strange and I think part of the problem is how long it took to finish the seven original novels.

Granted, this is just my opinion. I am sure some people believe the story is perfectly fine as it is. I am also sure, having done writing myself, that Stephen King is not lying when he talks about how difficult it is channeling Roland’s story and how the story wrote itself when he can.

Still, here’s what I would change going in chronological order of the books starting with books 1-3.

– Plant more seeds for the Crimson King here. He’s mentioned once by a throwaway character in this book and then we never hear his name again until book four and only on some graffiti.

– All the information doesn’t have to be given at once but more insight into what Roland intends to do when he gets to the top of The Dark Tower should be foreshadowed here.

The Drawing of the Three

– If Nineteen is going to be a reoccurring theme, then start with it here.

– Give the readers hints that Marten (no longer Walter) is not really dead.

The Drawing of the Three / The Waste Lands

– The Drawing of the Three is by far the best book of The Dark Tower series but the best ending for this book is the part one of The Waste Lands. Jake Chambers should have been drawn to Mid-World in the second book. The reunion scene between Jake and Roland was the catharsis readers needed for all that tension in book two.

– Plus, now we learn the Ka-Tet will be following the path of the beam in book two rather than waiting until book three.

– With the drawing of Jake in book two where it belongs book three can end where it should, with the beginning of book four and the end of Blaine the Mono.

– Without the drawing of Jake in this book the story is kind of lacking. What it needs is more development of the overall plot. Like in the last book let’s get a glimpse of Marten’s / Randall’s point of view.

– It takes way too long to get to the plot of Susannah’s pregnancy, and not only diminishes this conflict but Mordred as a villain overall. Let’s start addressing it here.

– As early as River Crossing or somehow in the city of Lud let’s have the group find out there is something wrong with the beams rather than later on in the series. It’ll make the journey to the tower more urgent.

– With what horrors Roland and his Ka-Tet see in the waste lands, let’s acknowledge that they’re probably from the Prim, the primordial chaos where demons in Roland’s world comes from.

You can navigate to the other parts from here:

Here’s a list of first lines from books, only ones that I have read, that are by far my top ten favorite. (So far.)